Not an engaging icon and looks hard to click

Ideally the Firefox image should be larger and have a custom background color that matches Firefox’s branding. 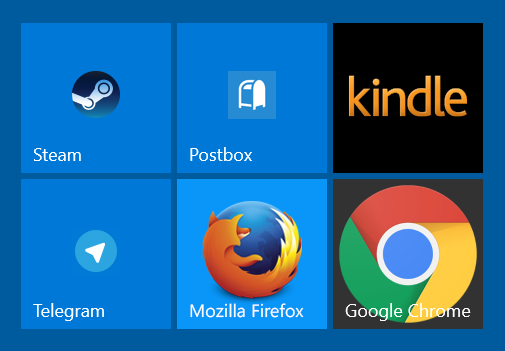 So pretty, so clickable

To customize a Windows 10 start menu tile, you need to create an XML file named ExecutableName.VisualElementsManifest.xml that tells Windows what image and colors to use for your tile. With this file in the same directory as your executable file, Windows 10 will display your custom settings. It sounds straight forward enough, but there were a couple of roadblocks.

In order to get my XML file into the right directory, I needed to tell the program that builds Firefox that I wanted my VisualElementsManifest file to be copied into object directory that it generates and that I want it to be in its dist/bin folder. To unpack that last sentence a little bit, when I run mach build (more info here), Firefox’s build program (mach) looks at Firefox’s configuration and definition files to see what the developers wanted included in the Firefox program. Then it builds the program in the object directory according to these instructions. I needed to give instructions to mach to add my new file to the same folder as the firefox.exe file.

If you take a look at Firefox’s source code, you will find .mozbuild files scattered through out. These files are the ones where we say what files we want copied into our object directory. Since I was adding logos and my VisualElementsManifest file to browser/branding/BRAND-NAME, I told the .mozbuild file in branding that I want my new files to be copied into the object directory. You can see my changes below in the lines that begin with +:

The key here is that I needed to use the ['..'] notation on FINAL_TARGET_FILES to specify that I wanted my files to be copied to obj-dir/dist/bin. Previously I used just FINAL_TARGET_FILES, and that copied my files to obj-dir/dist/bin/browser. This was because there was a variable in a Makefile that was setting the browser folder’s subdirectory to be obj-dir/dist/bin/browser. This variable is what was telling mach to copy all of my files into a subdirectory of dist/bin. By using [..] at the end of FINAL_TARGET_FILES I was able to override this local setting and just copy my files into bin. This was important for later because these files needed to be in the topmost directory of the installed program with firefox.exe

Once I added my files to the object directory, I needed to let Firefox’s installer know that these files should be included in the final installed program folder. To do this, I made the following changes to /browser/installer/package-manifest.in:

Adding my manifest xml file and images to package-manifest.in tells Firefox’s installer to include these images in the installed version of Firefox with the same file hierarchy as in the object directory in relation to it’s bin folder. This means that if my firefox.VisualElementsManifest.xml file is in bin, it will be copied in the root of my installed program’s folder. Since my png images are in /browser, they will be copied into the root folder’s browser folder.

Stay excited for part 2: what I actually put in those files